Peter was a regular, active, committee member of the Edinburgh Lodge for many years. He was friendly, warm hearted and blessed with the remarkable capacity to talk on a wide range of interesting subjects in great detail. Peter possessed an unwavering commitment to truth. His vast storehouse of knowledge included the subjects of Education; Psychology; History; Ancient Greece; and heraldry. However, Mathematics could be singled out as Peter’s greatest passion, this being the subject he taught in academic institutions and in schools. He was inspirational in devising appropriate ways in which he could explain maths to his pupils.

Peter could be relied on to be part of the team when events were taking place and work was to be done.

His compassion and kindness will be missed. 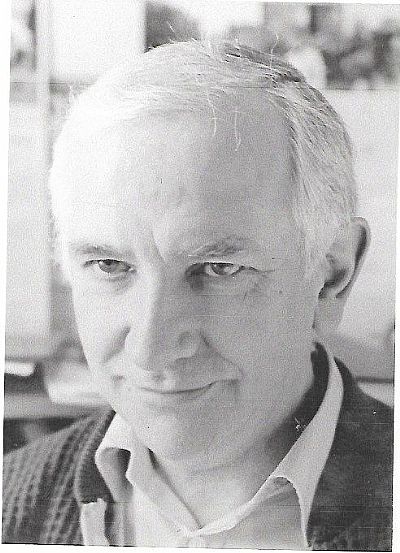 Jim was born in Hastings, East Sussex on 5 January 1941 to elderly parents, Sam Pym and Eileen Carey. His mother was a devout Catholic and aspired for Jim to become a Priest. However, Jim proved to be unsuitable for Junior Seminary because he asked too many questions. But, he soon became interested in Buddhism, and then came across Quakers by chance. He later studied to become a Buddhist priest in the Japanese Pure Land Tradition. The fact that he left school at the age of sixteen with only two O-levels, makes his self-taught, life-long, study of comparative religion, leading him to become an acknowledged authority on the subject, all the more remarkable.

Jim and Beryl, a nurse, were teenage sweethearts and were married in 1964. Their interest in spiritual healing started in their early twenties, and was mentored by the great twentieth century English healer, Harry Edwards. They became early members of the National Federation of Spiritual Healers (NFSH).

Jim held down a variety of jobs after leaving school, including being a semi-professional musician, (double bass, guitar and banjo) playing in local folk and jazz bands, (he had a very acute ear for music). He and Beryl spent the best part of a year with the newly formed Findhorn Foundation in the late 1960s. On returning to London, Jim was appointed secretary to the London branch of the Vegetarian Society, then became assistant manager of Watkins esoteric bookshop, and around 1977, he became manager of the Friends Book Centre, Euston Road, which he developed successfully. Later he moved to the publishing side of Quaker books, which involved him on trips to the USA meeting American Quakers, and sometimes Beryl was able to accompany him.

His influential booklet, What kind of GOD, What kind of HEALING? was published in 1989. After being made redundant in the mid 1990s, he wrote three more acclaimed books in his accessible conversational style: Listening to the Light, 1999, Sessions; The Pure Principle, 2000, Sessions; and You don’t have to sit on the floor, 2002, Rider.

In 2000, Beryl retired from being matron of two cottage hospitals in the Cotswolds, and they moved to Devon.  As often happens when married couples retire, they sadly found that they had grown apart. They agreed to live separately, but remained Best Friends for the rest of Jim’s life.

Jim first met Annie, an NFSH member, retired academic economist and basic income advocate, while conducting a retreat in St Andrews in 2005. He moved to Edinburgh in October 2006, where he soon became an active and much-loved member of Central Edinburgh Quaker Meeting. He missed the presence of a Jodo Shinshu Buddhist Sanga in Scotland. He continued his healing ministry with local NFSH groups, the Friends Fellowship of Healing, and through distant healing, much of it requested by email. He continued writing, teaching, and conducting retreats, sharing his knowledge of comparative religion and mysticism, and inspiring people to learn to meditate and to be in touch with the Spirit within.

From about 2016, Jim suffered from pulmonary fibrosis, becoming increasingly frail.  He was hospitalised following a fall at his home in August 2020, but was looking forward to being discharged, to return home to his beloved books and music, when he contracted Covid-19 in hospital and died suddenly on 20th October. He leaves an enormous gap in many lives.

Janet was a member of the society for many years first attending in Glasgow, then Edinburgh Lodge and, recently. travelling from Stirling for Fife Study Group meetings. She attended many Theosophical conventions and AGM as well as numerous lodge and study group meetings in both Edinburgh and Kirkcaldy.

In her late thirties, Janet began exploring spiritual awareness and human consciousness finding her way through many developmental workshops. She possessed a vast library of books ranging from The Tibetan Book of the Dead, The Bible, The Bhagavad Gita to Jonathon Livingston Seagull and works relating to the Tree of Life in many cultures.

Janet was a lively adventurer with a sharp intelligent mind, a strong warm heart and a divine sense of humour. Her Chilean father's ancestors called her to Chile for the first time in her 70s.

We lament the passing of Janet whose enriching presence will be sadly missed.  She leaves behind three loving sons, four well-beloved daughters in law, grandsons and many valued friends who miss her ever open-hearted conversation and twinkling smiles.

Fiona Hughes passed away suddenly on 17th May 2018 at her home in Dundee. She joined the society on 17th January 1997 and later made outstanding contributions both as an earnest student of Theosophical teachings, and in her sterling endeavours as Dundee Lodge Secretary, Treasurer and Representative on the Scottish Council where she was affectionately known as “Hugs.” 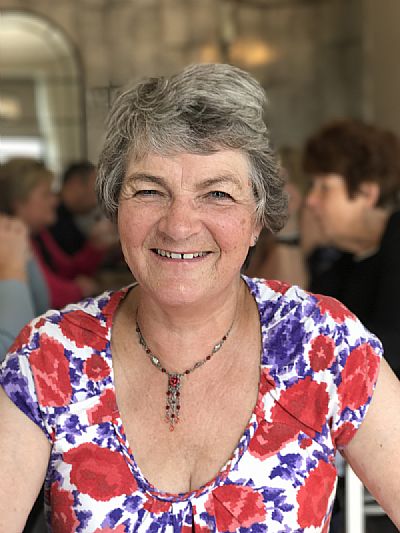 In 2005 the Dundee Lodge experienced great difficulty due to related factors of low attendances and lack of management. Fiona then assumed the role of Secretary. In her understated, yet passionate, manner she quickly revived its fortunes through her conscientious, dedicated and very personable approach. Fiona exemplified the spirit of co-operation, uplifting and inspiring those around her through her examples of selfless service performed for the benefit of others. Indeed without her tireless efforts, it is doubtful whether Theosophy would be operative in Dundee today.

Fiona, who also possessed an interest in Buddhist teachings, was particularly inspired by the comparative and inclusive approach of Theosophy and the spiritual insights that it provides. She was a very enthusiastic attendee and contributor both to the public meetings of the Dundee Lodge and its members’ study groups.

As a friend to so many people both within the Dundee Lodge and the National Society, Fiona will be deeply missed, but also most fondly remembered as a shining example of our principle objective of Universal Brotherhood.

Fiona is survived by her partner and fellow Theosophist Aubrey Wood, and by her children Janet, Lesley and Craig. 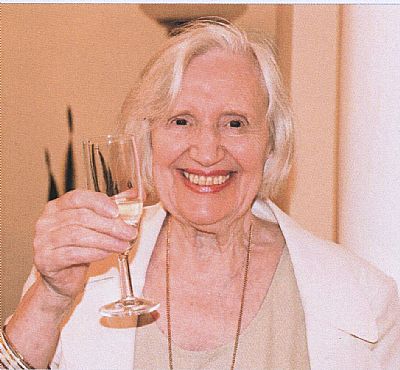 We are missing our good friend Irene MacMillan who passed away recently.  She was a staunch member of Edinburgh Lodge of the Theosophical Society  and a valued Committee Member until poor health deterred her.  Even in poor health she remained interested in the society and all its activities.  Those knowing Irene remember her with her vast knowledge of the Esoteric, her interest in discussing all such matters and her good humour in spite of difficult circumstances.

Irene’s connection with the Edinburgh building goes back to her being a member of the Esoteric Library in her 20’s.  She remembered the interesting books in locked, glass-fronted cases that could not be found elsewhere in Edinburgh.  It was a paying library with an annual membership and cost per book to borrow. She often talked of the two devoted Pagan sisters who ran that library and kept it in such good order. She only joined the actual Lodge many years later.

The following words were read at her funeral and I am sure those who knew Irene identify with her when they read them.

At every turning of my life I came across good friends
Friends who stood by me
Even when time raced me by.
Farewell, farewell my friends I smile and bid you goodbye.
No, I shed no tears for I need them not
All I need is your smile.
you feel sad, do think of me for that is what I’d like.
When you live in the hearts of those you love
Remember then
You never die. 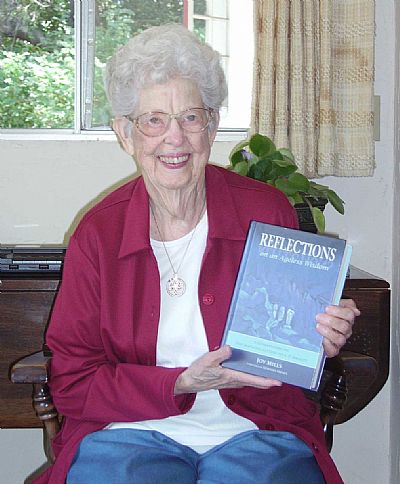 Joy Mills passed away on the morning of December 29. She died peacefully at her home in the Krotona Institute of Theosophy in Ojai, California. Joy was 95 years old, alert, and involved until her last days. She will be remembered for a life devoted to the the work of the Theosophical Society worldwide.

She was a profound student, and teacher who shared her ever-growing understanding in articles, books, and talks around the world. Her theosophical work took her to approximately 50 countries. She held a number of offices within the TS, president of the Theosophical Society in America (TSA), vice president of the International TS in Adyar, president of the TS in Australia, resident head of the Krotona Institute of Theosophy. Among her many accomplishments, during her first term as president of the TSA she founded Quest Books a line of theosophically inspired books for the commercial, popular market. Immediately following on her time as president in Australia, she returned to the USA and founded the Krotona School of Theosophy,​ which made it possible for public and members alike to access the resources of the center.

Joy was a friend and teacher to many, but mostly, she was an example of a possibility to give oneself without reserve to what she viewed as the all​-important work of the Theosophical Society. She will be missed.